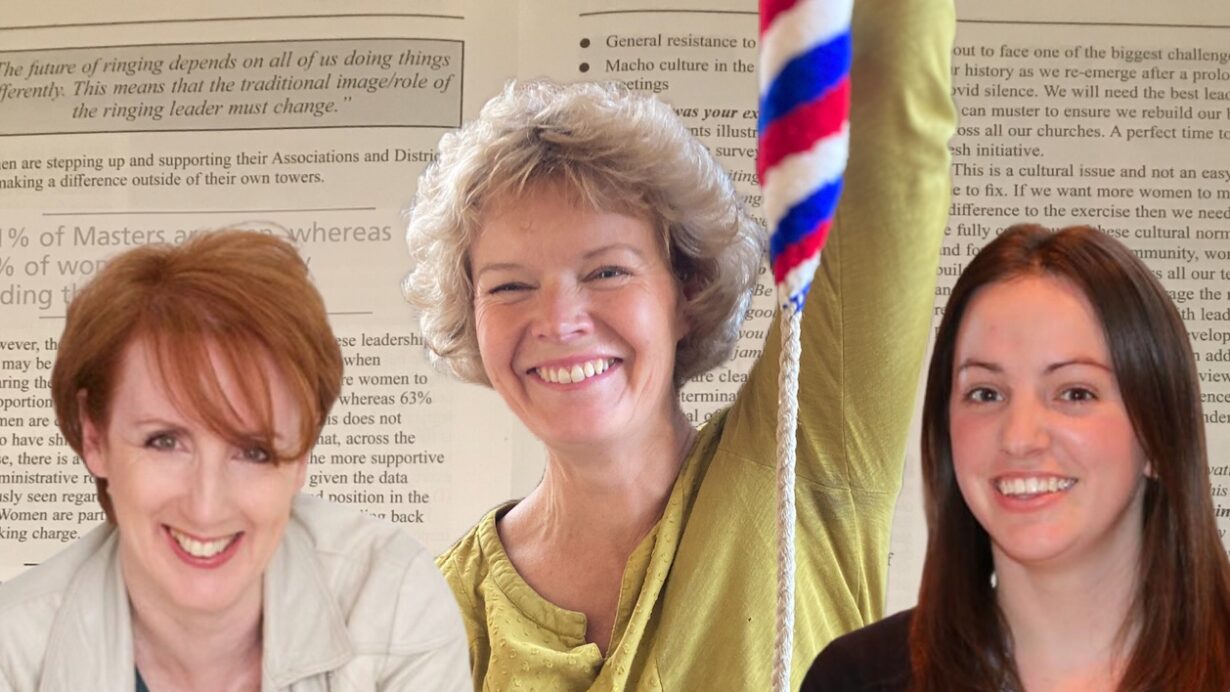 Listen to the full conversation:

Watch a 15 minute extract from the conversation:

About the conversation with Elva Ainsworth, Julia Cater and Tessa Simpson

This month, show host, Cathy Booth meets with three frank and formidable female ringers to understand the reasons why, although women make up about half of all ringers, they are greatly underrepresented in positions of responsibility and peal ringing, and conducting.

Elva Ainsworth, Julia Cater and Tessa Simpson – who have all participated in ‘groundbreaking, record breaking and point breaking’ ringing – talk freely about their own experiences and the self-fulfilling prophecy where lack of opportunity leads to a lack of confidence.

Yes, women can ring heavier bells. Yes, women can conduct (and may choose to do this from either the back or the front). And yes, some small girls are just itching to have a go on the tenor, but the boys always seem to get first dibs.

Rather than focusing on the negatives, though, this inspiring podcast offers some thoughtful suggestions about how to encourage greater equality of opportunity and how all bands can flourish with the greater participation of their women ringers.

Elva was born into a family of ringers and people-watchers.  She learnt to ring on the heavy 6 at St Mary’s Amersham, taught by her famous father Alan.  She studied Psychology at Bristol University and was Master of the University Society there in the early 1980s.  On leaving Uni Elva rang in St Albans and London, and in the 1990s had a few years living and ringing in Boston, US.  In recent years she has rung mainly in the South East.  Elva moved to York in 2018 and is very much enjoying being part of the Minster band.

Elva is a member of the Royal Society of Cumberland Youths and has rung nearly 400 peals, one of which was an all-female long length of Lincolnshire S Royal when she was a student.  She has three children who have all learnt to ring.  She is on the Board of The Ringing World and is a Central Council Representative for the Yorkshire Association of Change Ringers.

Elva is a business owner, an HR professional and executive 360 degree feedback coach with over 30 years’ experience.  She set up her own company in 2001 (Talent Innovations) and has employed several ringers there over the years.  Elva has specialised in 360 at every level in a full range of client contexts, and has given feedback coaching sessions to over 500 leaders.  She now spends her time training and coaching associates, consultants and client HR professionals in her techniques and skills.

Elva is a qualified homeopath.  She has also written two books on the subject of feedback: “360 Degree Feedback: A Transformational Approach” and “Reboot Your Reputation: 11 Ways to Change Their Minds” (available on Amazon).

Julia learnt to ring aged 7 at Winchester Cathedral and rapidly accelerated in peal ringing including in a number of early young ringers’ peals.  University in Birmingham exposed her to a new level of methods, striking and brought interest in ringing heavier bells.  After graduating she rang with the Cumberlands in London, and participated in many record-breaking women’s peals, as well as competition ringing and judging at a national level.

A decade or so later, “life” took a priority with her focus being on career and raising a family.  However, she continues to be an active bellringer and takes pleasure in teaching bell handling locally and participating in her local Guild committee as well as helping her own children learn.

More recently, she has been Chief Judge for the Ringing World National Youth Competition for a number of years, and is Chief Judge of the National 12-bell contest in 2022.

She is a firm believer that size, weight, age and gender should not be a barrier to where you ring in the circle and is passionate about demystifying the techniques for ringing big bells, so that anyone can ring anywhere in the circle with confidence.

Tessa learnt to ring at Guildford Cathedral when she was 10, and has been an active ringer ever since. In 2005 she moved to Cambridge for university, becoming secretary of the university ringing society and a member of the Cambridge Youths (the local 12 band). Whilst in Cambridge she learnt to ring handbells and also met her future husband through ringing. After university she moved to London where she began ringing regularly with the College Youths, and in 2015 became Master of the society.

Over the years she’s competed regularly in the National 12 Bell contest, ringing for Guildford, Cambridge and the College Youths, and winning the contest in 2015. She was also a judge for the first Ringing World National Youth Contest held in 2011.

As well as ringing regularly with the College Youths, Tessa is also a member of the St Paul’s Cathedral and Westminster Abbey bands. She lives just outside London with her husband and 10 month old baby.