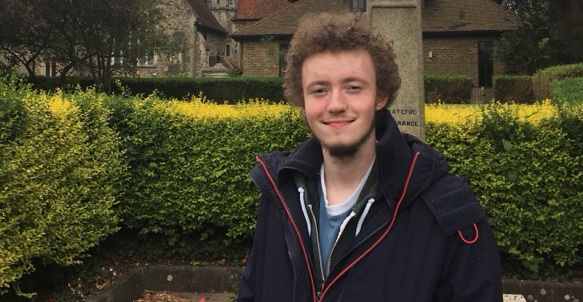 Oliver is clearly fascinated by all aspects of ringing and takes Cathy on whistle-stop tour of a huge range of ringing-related subjects, ranging from Ellacombe chimes, through belfry reform and on to John Warner and Sons bell founders.

Oliver also talks about his autism and the support he has had from the ringing community, reliving his positive experiences of the striking competitions he’s taken part in. Good times make great memories.

And just like any other ringer, he vents at the inaccurate depictions of bell ringing in the mainstream media. Did somebody mention Midsomer Murders?

Finally, on the question of Cumberland or College Youths? Looks like the verdict is still out …

2010-2012- Oliver Lee was taught how to handle a bell by Mike Slowe at Great Parndon, but it wasn’t until the early part of 2012 that his ringing career really took off. In those days Mike was also teaching a band at St Mary Magdalene Potter Street (which is also the church Oliver regularly attended) so Oliver later became involved in ringing there and still does to this day.

2012- Oliver started to ring with other people and rang alternatively at Great Parndon and Potter street, additionally the Parndon band also used to hold an occasional eight bell practice at Potter street on the first Tuesday of the month.  However in about 2014 this was eventually discontinued due to a lack of interest but Oliver benefited from this as it allowed him to ring on eight and probably helped him in the long run. Additionally, he was also heavily influenced by the Jubilee and the various peals that were rung for it but of course it would be another few years before he could reach this standard.

2014-2016- during this period Oliver mainly visited Waltham abbey (on their 10/12 bell practices) as well as attending the various learners practices that were held at places such as Thaxted, Moreton and Willingale as well as the pretty rough going six at Bobbingworth which are probably one of the few Thomas Mears sixes in the area and were a popular venue for quarter peal ringing in the 1970s! additionally, Oliver also rang on the interesting Warner octave at Churchgate street before they were eventually rehung by Whitechapel in March 2016.

2016-2018- This period probably marks a substantial leap in ringing as Oliver widened his horizons and actually became more involved in Association and national events.

April 2016- Oliver attended his first ringing course and learnt how to ring inside to Plain Hunt. It was at this particular event that he first met Andrew and Christina Brewster who invited him to join the Essex young ringers and take part in the various events that were organised, Oliver also joined the association and became involved in district affairs.  This year also saw him attend his first outing which was organised by George Vant who also organised a similar outing to London a year later it is fair to say that they were both very successful!

2017- probably one of the best years for ringing, this saw Oliver ringing in the South East England youth striking competition at Kings Langley (where the Essex young eagles were placed 5th) as well as visiting various towers in the county (including Writtle, Shenfield and Chelmsford cathedral), the year ended on a very good note with Oliver going on his first open day to Suffolk as well as Hertfordshire in October .

2018- again this was another particularly good year as Oliver took part in several striking competitions (including his first national one in July 2018), additionally he also visited several towers such as Guildford, All Saints Hertford, Broxbourne and many others. It was also around this period that Oliver began to ring quarter peals and during the year he clocked up a total of four which still seems pretty good even now.

2019- if 2018 was the year for quarter peals this was almost certainly a good year for outings as Oliver seems to have spent much of his time visiting various towers both locally and nationally, It also saw Oliver become a member of the Hertford county association as well as  ringing in his final two competitions in which the Essex young eagles both ranked 3rd, very much a good year in every sense of the word!

2020- although this is probably one of the most difficult years of Oliver’s life it did start rather promisingly enough with a visit to Standon where he attended his first meeting as a Hertford county association member.  However due to the various Covid restrictions that came into force in March Oliver hasn’t really done any proper ringing but he will be very happy when things eventually return to normal again.