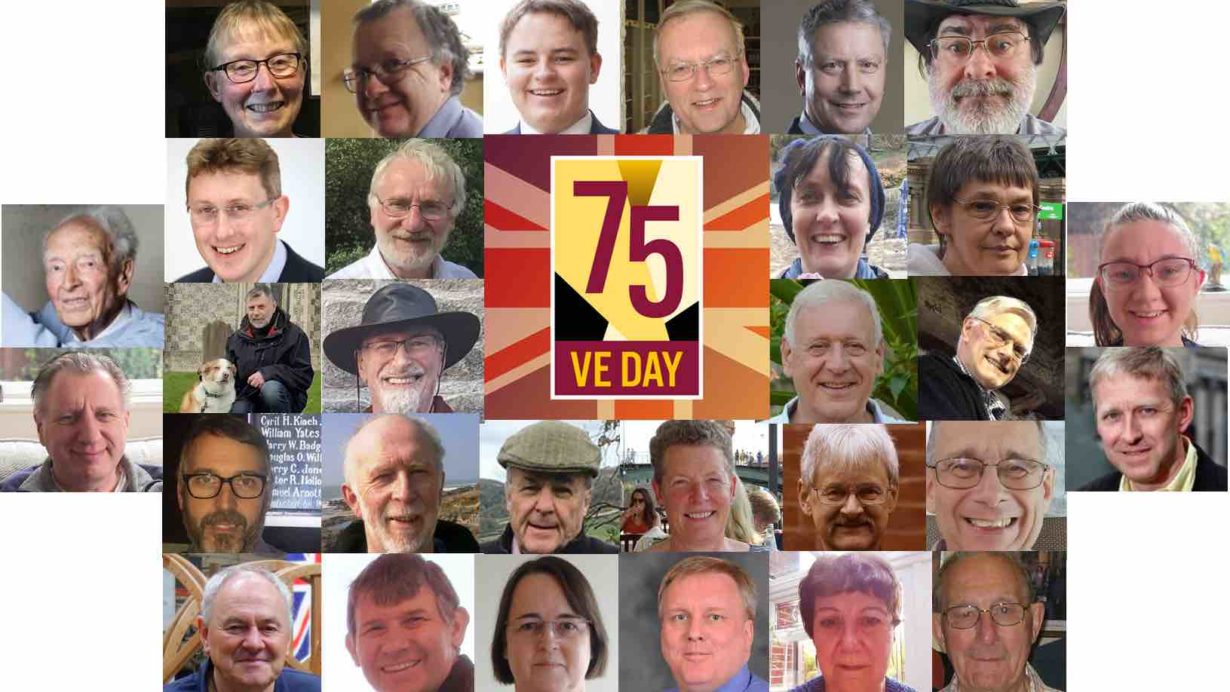 Version of this story, aimed at non-ringers…..

Timed to coincide with the 75th anniversary of VE day, this unique episode sees host Cathy Booth, joined by a whole cast of ringers, bust the myths about ringing during World War II, in ‘thirty voices, seventy-five years, one story’. And what a story!

Bell towers across the country are currently silent due to the coronavirus pandemic. Unprecedented is currently a much-used word, but in this case not warranted, as we discover that 2020 is not the first time in living memory that ringing has had to stop.

Cathy discovers the true story of this earlier ban on ringing, brought to life from archived letters and articles, and the amazing true-life experiences of people who were there, including Dennis Brock, Britain’s oldest bell ringer and Eric Hitchins who rang his first peal on VE Day 1945.

The parallels with the current situation are striking. We discover that ringers’ concerns echo down the years, with their distress at the prospect of not being able to ring at Easter felt as keenly then as now. And, it appears, they were just as resourceful when locked out of their towers. Oh, and not much has changed with the locals either – always complaining about the noise of the bells, until, of course, there’s a ban!

We obviously all know end of the story as we wouldn’t all be here today had the ringers not got back to their towers, rolled out their recruitment plans and shared their passion for ringing. This is a hopeful, positive and inspiring tale – truly a story for our times.

Story behind the story

Knowing bell ringers were missing their ringing due to the Coronavirus ban, Cathy wanted to produce an episode of Fun with Bells that looked back at the time when bell ringers endured a similar ban – in World War II.  Believing, as many historians do, that the ban was only lifted on VE Day, she asked Alan Regin to help her find bell ringers who had lived through the ban and could tell her about not being able to ring and what it was like being able to ring again.

Alan replied to Cathy, by return email, with suggestions of who Cathy could talk to and also sent 41 attachments, mostly scans of articles and letters published in the Ringing World  during the war.

Cathy enjoyed reading the eloquent language in the Ringing World and realised that, as well as the original idea of interviewing those that were there, there was a story portrayed in these Ringing World passages that was not widely known.  She then pondered how to put this across in the podcast until she hit on the idea of having current day bell ringers reading the passages.

As she only thought of the idea on the 23rd April and wanted the podcast to be published on 7th May, to coincide with VE day, there was only 2 weeks to get everything done.

Some of the people doing the recordings had links to their predecessors including Stephen Hoare from Thame who read the letter from Harry Badger.  Stephen sent in a photograph of a peal board with Harry’s name on it.

And there were laughs as somebody sent in the wrong recording which contained frustrated expletives!!

Fortunately bell ringers are great at teamwork and with many people’s input, most notably Rose Nightingale and Steve Johnson the project was completed in time.

The world’s oldest bell-ringer, a couple who have fostered more than 100 children and a man who escaped the holocaust, Dennis Brock was awarded the British Empire Medal for his services to bell ringing in 2019. At 100, he was then the bell captain of St Mary’s, Sunbury on Thames and still climbed the bell tower every week, as well as ringing at other local towers.

Dennis was also presented with the Order of St Mellitus medal in 2016 by the Bishop of London. This was also in recognition of his long service to St Mary’s and to the world of bell ringing. He is one of only a few hundred recipients of this award.

Dennis has been both instructor and examiner of bell ringing as one of the skills for the Duke of Edinburgh award scheme. As such he has attended the award of the gold medal at the palace.

Over the years Dennis has taught “several hundred” in the skill of bell ringing, taking around 3 months to reach competency.  He has said: “It is not a matter of strength (although the 3 1/4 ton tenor bell at St Paul takes some!), but you need rhythm and a musical ear to ring”.

Eric learnt to ring in 1942, aged 11, on the six bells at St Nicholas North Bradley, Wiltshire. Four young lads from the choir were ‘herded’ up the tower by Percy Harding the Tower Captain and taught on silent bells because the wartime ban was still on. They were – Eric’s older brother Laurence, Fred Slatford, Donald Lee and Eric. The first time Eric rang open was on November 15th 1942 for victory at El Alamein when the ban was temporarily lifted for a few hours.

Eric rang his first peal at age 14 on VE Day May 8th 1945 at North Bradley, the treble to Grandsire Doubles in 2hours 51mins. It was conducted by Percival Harding and was the first peal for three of the band – Eric, Laurence Hitchins and Frederick Slatford.

Eric’s second and third peals were also at North Bradley in 1945- Plain Bob Minor on August 6th and Grandsire Doubles on August 19th, which was his first inside and rung to celebrate VJ Day and the end of the war.

Eric’s early ringing was all near his home in Wiltshire, and there was a 10-year gap before he rang another peal in 1957. He has always been a committed Sunday service ringer and an active member of the Salisbury Diocesan Guild of Ringers. The four who learnt together were elected in November 1943 and remained active ringers throughout their lives. Eric served in various SDGR branch posts, was General Secretary and Treasurer from 1972-79, and is now the longest serving Vice President. Eric also served on the Central Council for 25 years from 1968 – 92. He proudly celebrated 75 years of membership of SDGR in 2018.

When Eric returned from National Service in 1956 and reconnected with ringing, he found that progression was not easy in a scattered rural situation. If he wanted to progress, he had to seek out the opportunity. Eric started going to Bristol and ringing with Tudor Edwards, Dick and Liz Bowden, David Heighton to name but a few and this was a significant turning point for him. He was elected to the ASCY in November 1958, proposed by Gilbert Harding of Trowbridge, and was proud to have been a member for over 60 years. Another significant step for Eric was joining Wilfrid Williams’ peal tours in the 1960s and 70s.

Eric has rung 285 peals all on tower bells ranging from doubles to maximus, conducting 12. He rang 127 for the SDGR, 38 G&B, 27 Bath and Wells and 23 ASCY. Eric’s  leading ringer and conductor is Jim Twiney with whom he rang 76 peals, followed by Tudor Edwards 59, Fred Slatford 54, and George and David Massy 48 and 45. Eric’s  most pealed tower is Trowbridge with 21, followed by Melksham 18 and North Bradley 17.

Eric’s favourite ring of bells is definitely the magnificent 35 cwt ring at Westbury Wiltshire where he has rung 9 peals including turning the tenor in on three occasions.

The two particular achievements that stand out for Eric were his first peal of Maximus when for his 12th peal he rang the 9th to Kent TB at Redcliffe in 1959 and then at Sherborne Abbey in 1966 when he turned in the 46 cwt tenor and conducted a peal of Yorkshire Major. Other memorable peals were Oakham Royal at Inverary in 1978, the first time he met his wife, Trish, Cambridge Major at North Bradley in 1983 in  which the four who learned together rang to celebrate the 40th anniversary of joining SDGR and finally his last peal, Grandsire Caters on the light ten at Mancroft in 2000.

The transcript for this episode is being worked on.

1 thought on “Lifting the WWII ban on ringing”