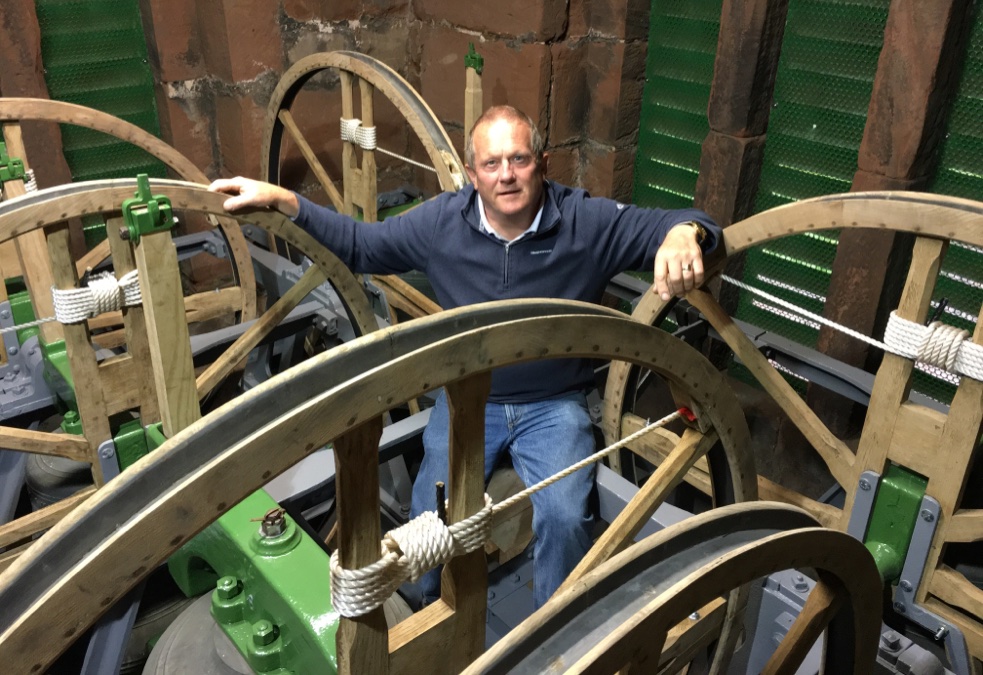 You may not have given ringing simulators a second thought before, but this episode will definitely get you scrambling up your belfry, with some sensors in hand.

Steve Farmer, tells host Cathy Booth the fascinating story of Simbell. Wanting an easy way to get get extra rope time without annoying the church neighbours with his noisy novice ringing, Steve took the unusual step of inventing his own ringing simulator.

Now simulators are not new, having been a thing since the advent of The Seague Silent Ringing Apparatus in the 1870s. However, Steve had the very clever idea of making his simulator wireless. And what is the advantage of a wireless simulator? Listen to the podcast to find out!

With technology moving so fast it’s hard to say what will come next? Steve looks into his crystal ball and gets us to imagine a future where we might all be ringing in virtual reality headsets. Sounds amazing – just as long as the ‘bong’ is in the right place.

Steve is a late starter when it comes to ringing, he first held a rope in October 2016 at the age of 54 after being asked by his wife Jill, a ringer of over 20 years, and who feared poor attendance, to go along to a Tower Open Day that was being held as part of the English Heritage Weekends at Tilston in Cheshire which has an extremely nice sounding ring of 6 by J Taylor & Co of Loughborough recast in 1924 and within 15 minutes he was hooked.

Being somewhat focused when he takes on anything, the traditional methods of teaching used by the Tower Captain at the time of 30 minutes before the main weekly practice as a learner session were not really providing enough rope time so having progressed to ringing with the main band fairly quickly Steve started looking at how technology could be used to extend his rope time, above that of ringing a silent tied bell. This was the start of an interest in the use of Simulators in the ringing environment as an aid to learning at all levels.

Having not found a suitable option for buying a simulator and seeing the complexities and expense of installing a wired system, Steve’s background in Electronic Engineering and Software was employed in developing a wireless solution that could be used in the tower, initially on a single bell, but it was soon seen that multiple bells could be covered by the wireless sensors he developed.

The first prototype wireless system was installed in St Mary’s in April 2017, with software written to “make a bong”, a considerable amount of testing was carried out under the watchful eye of Jill, good for his rope time having at this point been ringing for only 6 months.

Things moved quickly, discovering that were three extensive pieces of ringing software commercially available that all used the same protocols for linking to external bells, Abel, Virtual Belfry and Beltower were purchased and Tilston had a fully functioning Simulator system with moving ringers.

Simulators were sparse in the area, but word soon gets around and a few enquiries about purchasing a system were received and therefore rather than producing what was really still a prototype, a proper design was produced to create a commercial version and production of the main board was sent to a local electronics firm, “Simbell” was born.

Ringing progression was still a slow process in a tower with a long history of service call change ringing and a bit of plain hunt, the Tower Captain was an experienced ringer but due to lack of ringers with any significant method experience at all, Chester Guild training sessions were the only way of trying the heady heights of things like Plain Bob, but again these were not as regular as he would have liked.

In 2018, Steve attended his first Association of Ringing Teachers (ART) Conference where he took a stand to display Simbell, this was particularly useful as the conference was focused on the use of ringing simulators to teach. Steve could see the potential for their use not only with teaching new learners but their use to hone the skills of more experienced ringers, this conference also put the idea of teaching new ringers into his mind, but with only 2 years of experience was this possible?

In typical style he booked himself and Jill on an ART Teaching Bell Handling Course in October 2018 at Meole Brace in Shropshire and they both thoroughly enjoyed it, to progress he asked the Church PCC if they would mind if he taught at St Mary’s which they agreed and he started a few adhoc lessons using the simulator to help existing ringers with things like striking and hunting.

As teaching progressed, Steve decided that he should get more courses under his belt as well as to gain accreditation and membership of ART so the next target was an ART Module two course which was going to take place in January 2020 in Dunham Massey, a Tower that had purchased a Simbell Simulator, but one of the requirements was ringing a Quarter Peal inside, but how do you manage this when you haven’t a band available that can ring it? Of course, you learn it on the Simulator which is what he did.

Steve spent 3 weeks ringing Plain Bob Minor until he could reasonably confidently ring on any inside bell and also rang a number of quarter peals with the simulator which was essential to prepare for the mental concentration required. He then called up his friends at the Chester Guild and arranged what was probably the most experienced group of ringers he could find to meet him on the Friday of the week before the course, the evening before his quarter peal attempt he attended a practice at another local tower and the ringers there gave him the first chance to ring a plain course with “real” ringers! It was with a little trepidation that he got to St Mary’s the following morning, but with such a strong band around him, he achieved his first Quarter and more importantly in his mind, proof that simulators had a significant place in training at all levels, and of course he could go on the training course.

Sadly, the Tower Captain at Tilston at the time was not a fan of Simulators and certainly did not support their extensive use in training new ringers above that of a short session without any real guidance, and his response to such styles of teaching was to restrict access by locking up the bell ropes when he felt like it and retaining the only key, but by then the Covid pandemic was almost upon us and things were changing.

It was not possible to access the Church to ring at all from March, and by May 2020, Steve was thinking of new options for ringing as it was apparent that “real” ringing was not going to return for some time. Having been at the ART Conference in 2018, he had seen several dumbbells and had tried a few, but lead times were long and they were not cheap. Steve decided he could build one to put into his garage loft from scrap wood he had lying around. He filmed the whole process of building his dumbbell calling it a “Scrap Challenge”  and then posted it on YouTube as he went along. It took a few weeks to complete, but now he could ring again on what felt like a light treble, but heavier than the ones he had tried at the Conference.

The video production was fun, and with people now looking more at simulators, Steve started producing training videos on how to use a simulator to the get the best out of it as a tool for teaching. These again were put on his “Simbell Technical”  YouTube channel, and were mainly based on the Virtual Belfry simulator software.

Steve took on the job of Steeple Keeper at St Mary’s in 2018, and Jill inherited the position of Tower Captain in 2020, as we were still in lockdown an opportunity arose and in January 2021 he got permission to carry out a much needed refurbishment and repainting of the bell frame, this took him and Jill 4 months to complete and was a significant learning process having never dismantled a belfry, but it was all completed without incident and it now ready to support the next stage of ringing.

Steve is now taking on the responsibility for teaching new ringers and helping those who want to progress to methods to do so, but most of all he is determined that Ringing should be fun, and training should be tailored to the individual and of course, Simulators are high up in the plan.