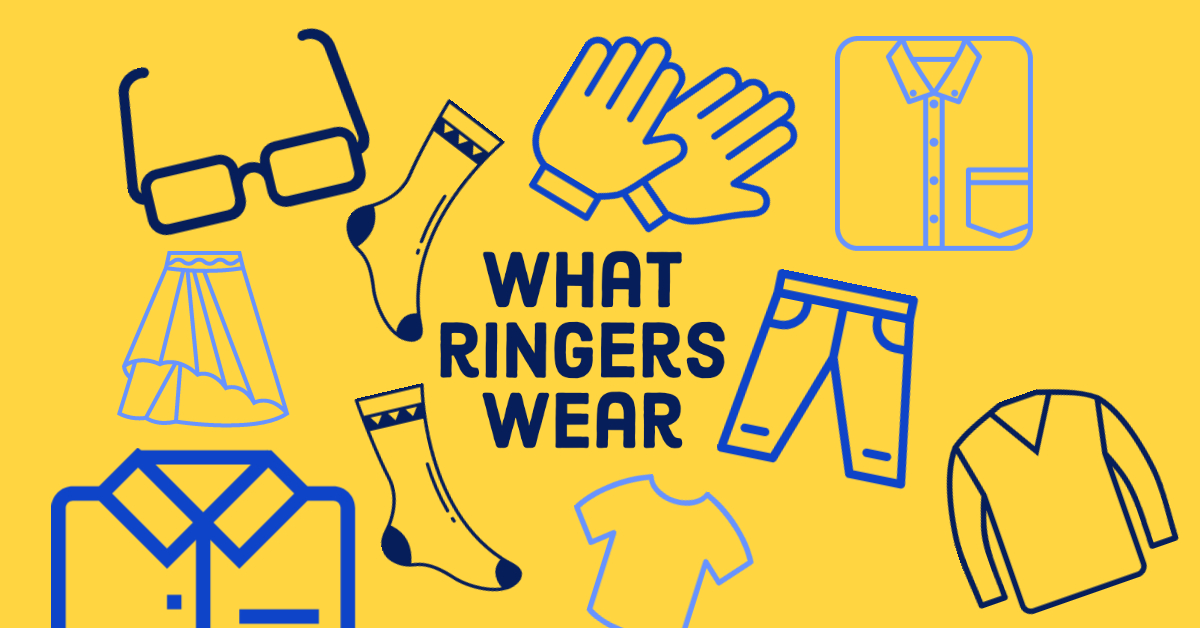 This episode sees host Cathy Booth explore the question of what ringers wear. You may or may not be surprised to hear that the answer is not bell-bottom jeans.

Guests Deb, Alex, Elizabeth and Michaela touch on history, safety and decorum as they share experiences, research and anecdotes on what to wear, or more importantly what not to wear!

At times this could be mistaken for an episode of ‘carry on campanology’, particularly when it comes to the topic of wardrobe malfunction. Preserve your modesty at all costs by avoiding floaty frocks, bringing back braces and being mindful of who is following you up the ladder.

And as always, bell ringers love a controversy – polo shirts with tower logos on? Good or bad? You decide …

Alex first discovered Change Ringing through his interest in Ecclesiology, the study of churches & after listening to the bells of Dunkeld Cathedral at the age of 11, became fascinated by the heavy instruments. Fast forward a few years and Alex started learning at the age of 15, on the oldest change ringing bells in Scotland (SS Andrew & George), located in Edinburgh, where he regularly rings today.

Now 18, Alex has been bitten by the tower grabbing bug and has already rung at half of all the towers in Scotland – which is really hard to do given how sparse they are!

Alex likes the uniqueness of The Exercise, especially as a result of how uncommon it is in Scotland, and enjoys the history, social aspect and pretty much everything else about it!

Deb started ringing in 2001 when a visit to Crondall All Saint’s nativity service saw her introduced to a friend called Mike ‘who is also a bellringer here’. Intrigued and voicing an interest she got frogmarched up to the belfry and ringing chamber and started the following week.

Deb has always loved rolling up her sleeves and volunteering. Having done a few courses as a student on The Bradfield Ringing Course, she started helping and discovered a love of helping and teaching in sometimes unconventional ways.

Later she became All Saint’s tower captain and because so many learners arrived, she decided to enrol with ART.

She is a stickler for technique and 2 children grew up to be cathedral ringers.

Seeing and supporting a shift towards modernisation withing the Central Council, Deb enrolled into the volunteer and leadership Committee.

She has always enjoyed helping with social media coverage of ARTs AGM and CC weekends and enjoy creating querky social media content for the ringing community when asked.

After selfishly leaving the UK for 2 years in Cairo, she is back a year early and looking forward to a new challenge with The Ladies Guild.

As a shy and retiring person…. Deb seems to be known for her enthusiasm and love of all things bells, teaching, social media, and Cider….

Lianne Brooks started ringing in 2011 at Ratby church in Leicestershire. She rings regularly at 4 different towers a week and is currently learning Stedman and Kent.

She was introduced to ringing by Mark Banner and was instantly hooked.

Lianne’s only regret is that she didn’t take up bell ringing when she was younger.

Elizabeth Johnson started ringing in 1956 as part of a recruitment drive to teach ringers to form a band for the new church being built in the tiny village of Little Chart in Kent. The medieval church had been totally destroyed in 1944 by a doodlebug. The bells were saved
and recast into a 6 cwt six.

Initially, they were taught at the nearby village of Egerton, by September 19th 1956 the band was sufficiently competent to ring for the consecration of the church – a really special day. In May 1957, Elizabeth rang her first quarter peal. This was after a failed peal attempt so she could conceivably ring a peal within a year of starting ringing! Her first peal was in October
1957.

When starting physio training at The London Hospital, Elizabeth gave up ringing having clocked up a few quarter peals and 11 peals.

In 1980, Elizabeth found ringing again and has rung at St Joh’s New Alresford ever since. A peal total of 107, a quarter peal total of 800, tower total over 1300 towers from New Zealand, South Africa, USA, Canada. Elizabeth has been secretary of the Winchester District
of the W&P for 7 years, chairman for 3 years, President of the Guild of Medical ringers for 3 years and is a member of the SRCY.

Micki comes from a bell ringing family in Wiltshire. She took a long break from ringing when the company she worked for moved from London to Hampshire, but took it up again around 8 years ago. After lockdown she became tower captain at St Peter’s, Stockbridge and St Peter & St Paul’s, Kings Somborne, following the sad death of the former’s tower captain and the relocation of the latter’s tower captain. She is also Winchester District Secretary of the Winchester & Portsmouth Guild of Church Bell Ringers, is a member of the Ladies Guild Southern District and enjoys ringing whenever and wherever she can.