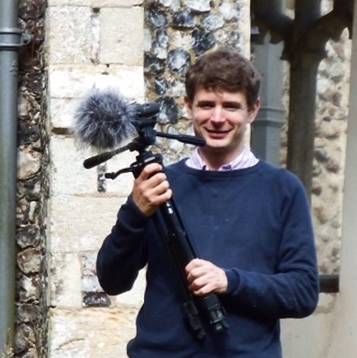 An interview with Chris Richmond

Most Ringing Remembers recruits were thrilled to have rung at their tower for last year’s Remembrance Day but enthusiastic new ringer and amateur film maker Chris Richmond rang at seven!

Podcast host, Cathy Booth, finds out that Chris’s enthusiasm initially stemmed from his interest in sound recording. His desire to record the sound of the bells led him up into a local tower, but it was the sound of the bells ringing down in peal was the final push he needed to take hold of a rope and learn to ring. From then on he’s been hooked.

New ringers bring all sorts of skills with them and Cathy hears about Chris’s brilliant project where, with the help of Norfolk’s ringing community, he is recording Norfolk’s church bells and uploading these into the ringing simulator at the Mancroft Ringing Discovery Centre in Norwich. This mammoth task has enabled him to visit some 55+ belfries so far.

Much to the joy of ringers who visit the centre they can now choose which Norfolk ring of bells to ring on. This includes some of Norfolk’s unringables and colourful thud buckets, which makes for a great game of ‘guess the tower’ when visitors arrive!

A budding sound recordist living in rural Norfolk, Chris Richmond thought the sound of church bells would make a brilliant recording subject. However, as an outsider to the ringing world, he didn’t know where to start in finding out where and when the bells were being rung. He knew of a few clock chimes and a rather fascinating 12-bell carillon in a church near where he grew up, but it wasn’t until January 2018 when he stumbled across the website of his local ringing association- the Norwich Diocesan Association of Ringers (NDAR) that he found a list of all the practice nights in the locality and decided to pursue one…

Chris has always loved the variety the hobby and before he’d even mastered bell control he was trying out different towers.  He has found that everybody is so welcoming in this hobby- wherever you go.

Early in 2019, things went “full circle” as he embarked on a sound recording project in association with the newly-opened Mancroft Ringing Discovery Centre in Norwich to record the sounds of Norfolk’s church bells to use in the training simulators there.

Aside from being great fun, such a collection of bell sounds forms a unique interactive archive.

At the time of writing he had recorded over 60 towers – quite a dedicated task. The recording sessions have done wonders for his own bell handling.

It has also given him the opportunity to meet more like-minded people and see some fascinating places he would never have been able to see otherwise. For example, the bell tower of Norwich Cathedral, which was arranged courtesy of the president of the NDA, who happens to be a Canon there.

As for Chris’ ringing progress, he has rung for Sunday services, weddings, and took part in the armistice day ringing as a Ringing Remembers recruit covering 7 towers that day. At the moment he is trying to master Plain Bob Doubles, which he can almost ring on any inside bell.