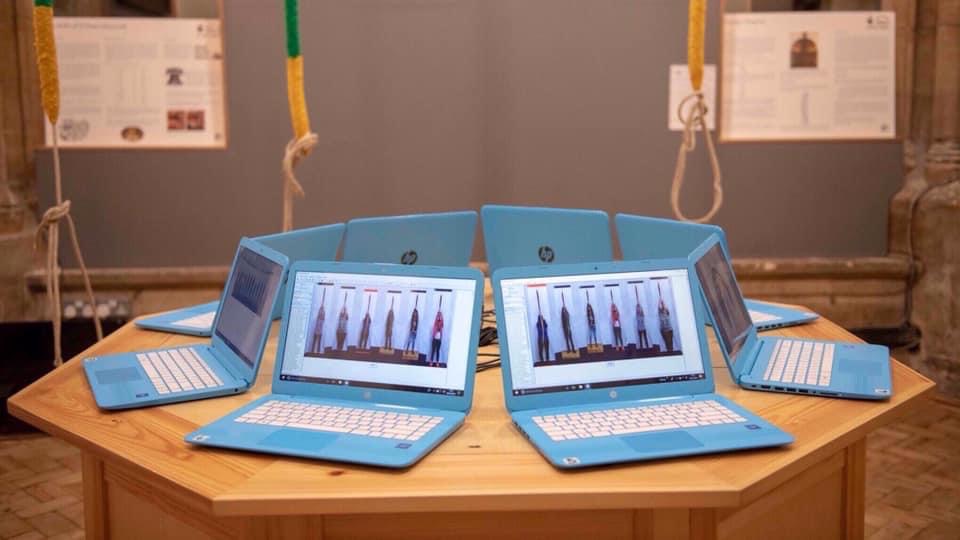 An interview with Simon Rudd and Nikki Thomas

Home of the first true peal, St Peter Mancroft in Norwich is now home to the brilliant Mancroft Ringing Discovery Centre. Podcast host Cathy Booth catches up with Simon Rudd and Nikki Thomas to find out what’s been happening.

Well, there’s been so much going on it’s hard to know where to start! Training courses at all levels, lunchtime pay as you go sessions, band visits, junior ringing and ringing festivals all feature. That’s when the team is not out and about taking ringing into schools and letting hordes of excited novice ringers have a go on 12 bells at Great Yarmouth.

But what of lockdown? Cathy discovers that both Simon and Nikki have actually been doing more ringing in lockdown than ever before – extending their handbell repertoire, honing their conducting skills and setting themselves ever more complex challenges in Ringing Room.

For those of you who are more advanced you might want to learn to ring Cambridge Suprise. Or maybe that’s not the best place to start! How about starting with Cornwall first? This podcast also includes an excerpt from Matt Austin’s conversation with Don Marrison about less traditional steps to learning surprise methods, first broadcast in our North American sister podcast, Treble’s Going.

Whatever your level and whatever your pathway, once everything is safe, take yourself and your band for a weekend in Norwich and try out your new skills on the MRDC training bells. You know you want to.

Simon Rudd has been an East Anglian ringer for 50 years. He learned to ring in the village where he was born, Great Bromley, near Colchester. In the intervening years, he has slowly migrated back towards Norfolk from where his family moved in the late 19th century.

At the age of sixteen Simon became the tower captain at Great Bromley and will therefore have his hat hung in the tower when he dies; an unusual tradition peculiar to Great Bromley which has a series of seven or so hats hung high up on the wall of the tower.

Simon rung his first peal in 1972 at Ardleigh in Essex and in his early ringing career was inspired and encouraged by the great gentleman of Essex ringing, Frank Lufkin. He has now rung approximately 1,700 peals, over 100 of them at St Mary-le-Tower in Ipswich where he rang before moving to Norfolk.

Simon is a member of St Peter Mancroft Guild of Ringers and currently chairs the committee which manages the Mancroft Ringing Discovery Centre (www.mrdc.org.uk).

Simon says that like so many others, ringing has been a lifelong passion and the team-work aspect of the hobby is a source of great satisfaction.

Nikki Thomas learnt to ring in Norfolk from the age of 9 having been taken along to listen to the “Proper Ringers” ringing the Christmas Eve peal at Long Stratton by her Dad who is also a keen bell ringer.

Nikki joined the Guild of St Peter Mancroft in the 1980’s and has been a Guild member ever since. Having moved to Broadland along with husband Neil they established a band at South Walsham. The South Walsham band has both a Junior band and a Regular band, with two practices a week. She has been lucky to ring in a great many places not only in the UK but also Australia and USA.

Taking on the role of General Secretary of the Norwich Diocesan Associations of Ringers, a post she took on as she is unable to resist the charm of the NDA President the Rev Paul Cubitt and thought it would compliment the role of Manager at the Mancroft Ringing Discovery Centre.

In November 2018 Nikki was appointed the Manager of the Mancroft Ringing Discovery Centre, a part time paid role that appears to occupy every spare minute.

When not ringing Nikki plays her clarinet in a wind quintet and a local orchestra, she also loves cycling.

About Matthew Austin and Treble’s Going

Matthew Austin arrived at Kent School (preparatory, boarding high school) in 2008 to teach mathematics and started ringing later that academic year. Students can ring at Kent as their afternoon activity, as their student job (providing service ringing around our chapel programs), or just for fun; Matt gets to do all three!

To connect with and learn from fellow ringers they make (made) frequent trips to Smith College, Boston, and New York, and less-frequent trips to Philadelphia, Washington, and England. On one drive back from Washington the kids asked “Mr. Austin, is there a bell-ringing podcast we can listen to,” and the idea for Treble’s Going was born.